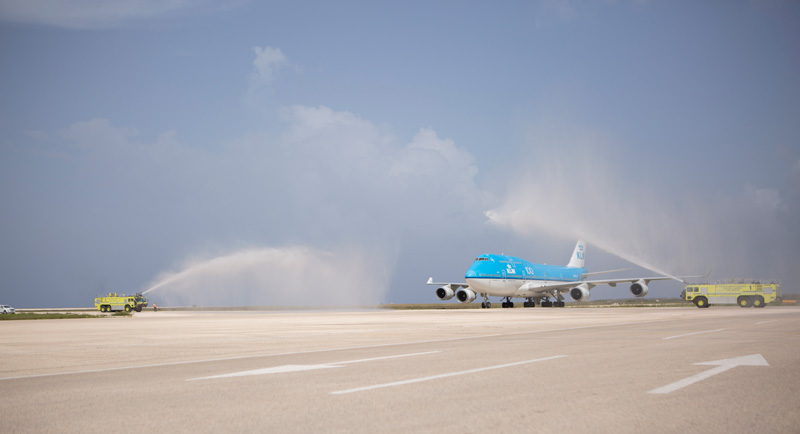 WILLEMSTAD – October 7, 2019– Today, October 7, 2019, is a very special date in the history of aviation, as KLM celebrates its 100th year in business! The Curaçao Tourist Board (CTB) and Curaçao Airport Partners (CAP) wish to congratulate the company on reaching this momentous milestone. KLM is the only airline in the world operating under the same name since inception in 1919. Back then, KLM founder, aviation pioneer and first CEO Albert Plesman had a dream: “The ocean of the air unites all people”, a network that connects all people.

Being in the top-3 privately-owned companies in the Netherlands, KLM has a huge impact on the Dutch economy. For us here in Curaçao the airline is a key partner, considering that Curaçao is the airlines’ largest Caribbean destination and the Netherlands is Curaçao’s single largest source market for visitors. Who hasn’t been left in awe of the sheer presence and magnitude of one of KLM’s jumbo jets touching down at our airport? According to CTB’s CEO, Mr. Paul Pennicook: “One-hundred years is a once in a lifetime milestone and KLM has been Curaçao’s biggest partner over all these years. The island is truly proud to be a KLM partner and wishes the airline and its personnel all the best with their centennial celebrations. Congratulations and let’s toast to another century of success.” In the words of CAP’s CEO Mr. Ralph Blanchard: “CAP salutes the amazing achievement of KLM in surviving and prospering for 100 years in the most demanding and competitive industry in global commerce. In addition to achieving individual airline success, KLM pioneered the creative foundation that stimulated mass consumer travel with the introduction of its “Tourist Class”, or what we now refer to as “Economy Class”, concept and product that made global travel affordable to the average consumer. We wish them another 100 years of success, and encourage their competitive creativity”.

Celebrations and festivities have been organized worldwide, and Curaçao was no exception. Here, KLM’s centennial milestone was celebrated in a very pleasant atmosphere. The island’s Prime Minister Mr. Eugene Rhuggenaath and the Minister of Economic Development Ms. Giselle Mc William were also present at the special occasion, together with industry partners and special guests. KLM’s famous Queen of the Skies aircraft completed the celebration. The CTB and CAP are counting on many more years of daily flights between Amsterdam, the Netherlands and Willemstad, Curaçao. Pabien!