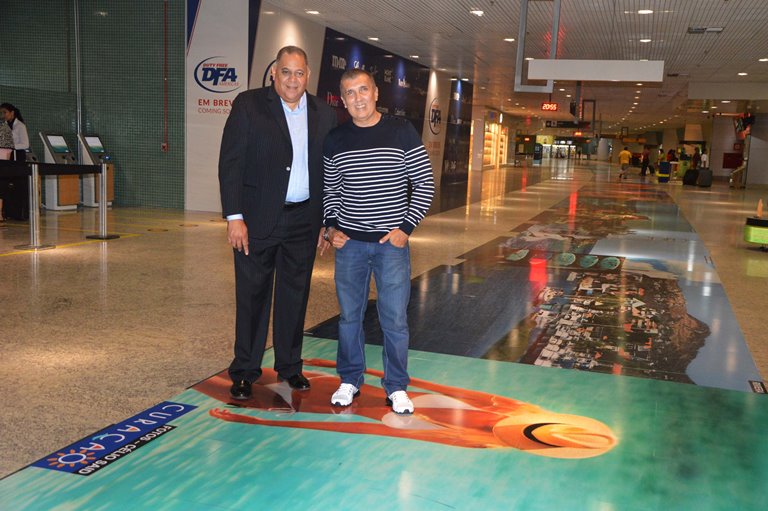 …Curaçao with another novel initiative…
WILLEMSTAD – May 17, 2017–Curaçao was once again in the spotlight in Brazil, with the launch of an exposition of gigantic pictures of the island at Manaus airport. A total of 70 shots of the island, taken by professional photographer Celio Said, are carpeting the floor of the check-in area at the airport in Manaus.

The 190-meters long and approximately 3-meters wide exposition spread out in the check-in area offers striking impressions of some of Curaçao’s most breathtaking sceneries. The ultimate objective of this unique and novel move, seen for the first time at any Brazilian airport, is to arouse the curiosity of travelers and motivate them to go visit the island. The shots show off Curaçao’s multiplicity, with its beaches, downtown area and various tourist attractions. In conjunction, a magazine is being handed out at the check-in area during the airport’s peak-traffic hours, with information on the island’s tourism product, and on its cover Ms. Chanelle De Lau, Miss Curaçao 2016.

The Curaçao Tourist Board (CTB) is excited about the reactions to this exposition in the Brazilian market, and the coverage it has received in local Manaus newspapers as well as on television. Also, the eyewear brand JoliJoli has launched a new collection of glasses by the name “Curaçao,” which they will be promoting in the coming months, in a campaign that will also be featuring images of the island. JoliJoli representatives were present at the launch of the photo exposition to showcase their Curaçao collection. Various additional activities are planned, aiming to arouse the interest of Brazilian travelers in Curaçao as a destination.