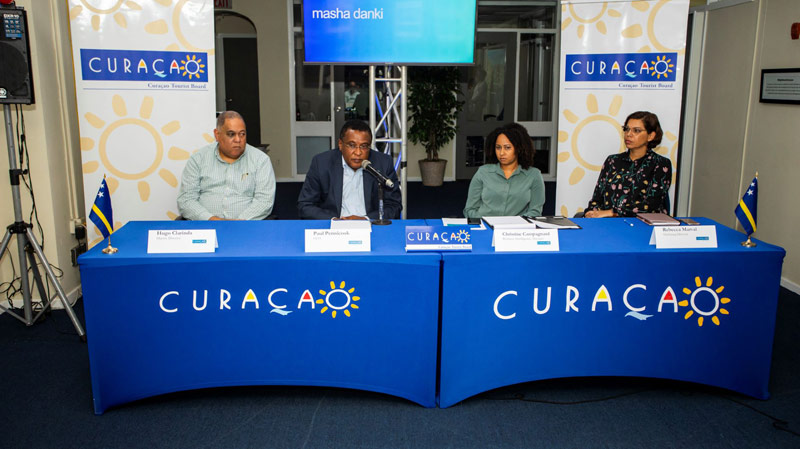 “Last week there was a lot of news and discussions about loss of airlift to Curaçao and the likely impact of such development on the economy. With tourism being a main pillar of economy and airlift being an integral component of tourism, it is understandable that there would be concerns if in fact there was a massive loss of air seats to the destination” said CTB CEO Paul Pennicook. He continued by saying that after visiting and speaking with the airlines directly he can now give a full update on the ailift scenario.

In 2018 September and October the gross number of seats coming in was 33,477 for the following airlines; American Airlines, JetBlue and Avianca. After the schedule adjustments and cancellations there will be 20,380 for September and October 2019. In addition to that there will be another 4,672 seats (Wingo and Caribbean Airlines) this September/October that were not available in September/October 2018. Therefore, the net loss of seats is 8,425. The primary reason that the adjustments in airline schedules are all related to September/October, a period known as Fall in the North American market, is that historically this period has always been regarded as the off-season in both North and South America. The problem is compounded by the grounding of the Boeing 737 MAX,this year.

The top six countries of focus are:

All six of these markets are showing double digit growth. Singling out the US market Mr. Pennicook said that there was 20% increase in arrivals in 2018 which made us reach 73,000 stayover arrivals, a new record. In 2019 so far there is a further 13% increase in US arrivals.

The main driver of demand in a leisure destination like Curaçao, is new rooms coming on stream, Mr. Pennicook said. He went on to explain that the performance in 2018 and 2019 so far was all achieved without a single new room. The good news is, we have new rooms coming on stream later this year that will not only help us to maintain growth momentum but should actually result in increase demand.

In addition to the new rooms coming on stream there is also development in the category of new airlift and discusssions are continuing with multple airlines regarding new airlift.

With new rooms coming on stream and anticipated additional airlift the CTB is confident that there will be continued growth in tourism in Curaçao.

Survey Study to Evaluate the “Curaçao is Dushi - Live it, Love it” Awareness Campaign