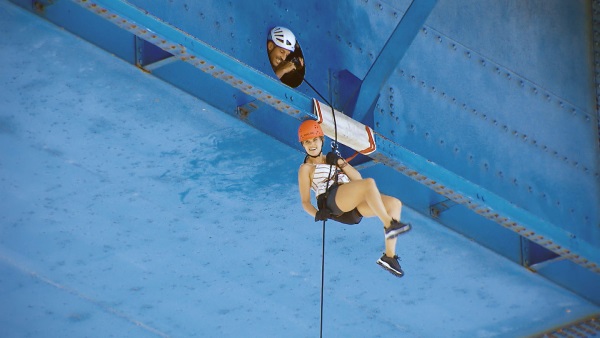 WILLEMSTAD-September 7, 2018 – In the semi-final of the current season, aired on 29th August, Bachelorette Nadine Klein spent her three dream dates on the ABC islands, one on each island. Showcasing a variety of activities and locations, the episode positioned Curaçao as romantic and diverse holiday destination in the German market.

The dream date with Bachelorette Nadine Klein and candidate Filip Pavlovic started off with a thrilling rappelling session at Queen-Juliana-Bridge offering a spectacular view over Willemstad. The pair continued their journey in the iconic vintage Volkswagen bus “Betty” giving a greater impression of the island’s nature and landscape. During a stop at a private beach close to Playa Porto Marie the protagonists enjoyed a romantic picnic. The date ended with an exclusive dinner at Baoase Luxury Resort where the couple stayed overnight.

Curaçao Tourist Board supported shooting and production which took place in June this year. Curaçao was promoted via the Social media channels and the website of the show as well as in a raffle to win a trip to the island aired in commercial breaks during the semi-final. The internationally acclaimed TV format regularly generates a great buzz in German lifestyle media and the general public. With the inaugural Condor flight from Frankfurt/Main to Curaçao coming up in November this year, “The Bachelorette” successfully increased awareness among future visitors.

The episode on August 29 was the highest-rated broadcast during prime time, achieving the second highest rating of the entire season. In total 1.99 million people followed the show on television network RTL, with a main share of viewers aged between 14 and 49 years.