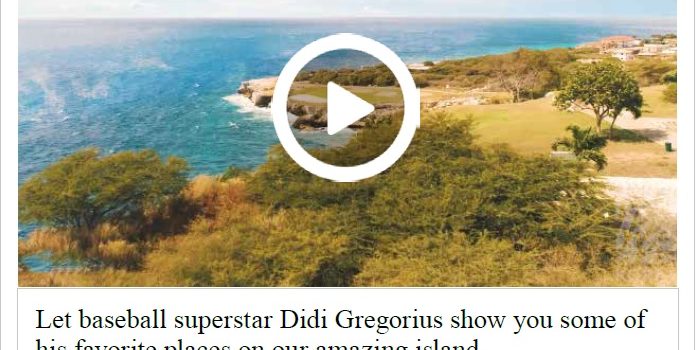 WILLEMSTAD – May 2, 2018 – The Curaçao Tourist Board (CTB) has partnered with CBS (WFAN), the premier radio station of the New York Tri-State area, thus aligning Curaçao with the most iconic sports brand and leveraging the power and reach of the Yankees’ radio station to position Curaçao as a premier travel partner. A fully integrated platform aimed at the North-American market was developed for this campaign, showcasing both Didi Gregorius and the island of Curaçao.

Didi Gregorius is the shortstop of the New York Yankees. As part of the campaign starting this May 2, Curaçao will be mentioned every time Didi steps up to the plate, and for each home run he hits, a fan will win a trip to Curaçao. Didi’s performance in the last couple of games will definitely play a key role in the execution of this campaign. The contest is aimed at consumers in the New York Tri-State area and the New York Yankees fan base. Fans can enter the Curaçao Home Run Contest through a web page set up for the campaign. The games qualifying for this contest are the first 28 regular games of the New York baseball season in which Didi will be batting. The games are scheduled between May 2, 2018 and Sunday, September 30, 2018. Lodging and tickets for this campaign are courtesy of the exclusive partners Papagayo Curaçao and JetBlue Vacations.

Additionally, in the month of April, the CTB launched its #ThisIsCuracao campaign, also featuring Didi, which will run until May 25. The campaign’s main objective is to establish a connection between Curaçao, Didi and the North-American market. As part of the #ThisIsCuracao campaign, the CTB produced a promotional video in which Didi introduces the future visitor to his favorite activities and spots on Curaçao.The video shows him relaxing at Cas Abou Beach, playing golf at Blue Bay, having a meal at Komedor Krioyo at Landhouse Dokterstuin, visiting the downtown and Pietermaai area, and admiring the beautiful murals produced by local painter Francis Sling. The video has reached 133 thousand views and counting, which goes to show the huge popularity “our” Didi is enjoying. This promotional partnership with Didi will allow thousands to learn about our destination. The CTB also launched the page www.curacao.com/thisiscuracao featuring some short stories with Didi’s favorite places.

Together with the #ThisIsCuracao promotion, the CTB launched a social-media campaign inviting consumers in the New York Tri-State area to visit Curaçao’s Facebook page and share the video, with a chance to win a trip to Curaçao with JetBlue Vacations and a stay at Floris Suite Hotel Spa & Beach Club.