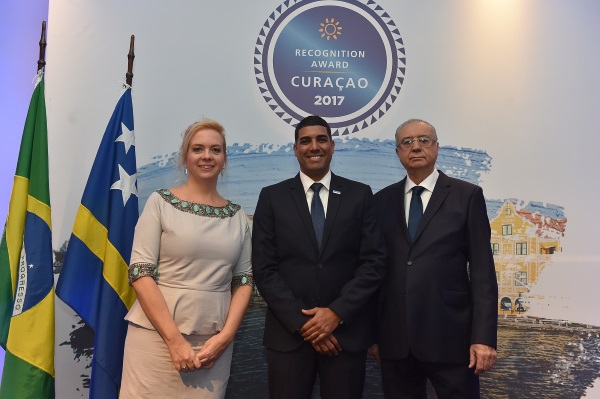 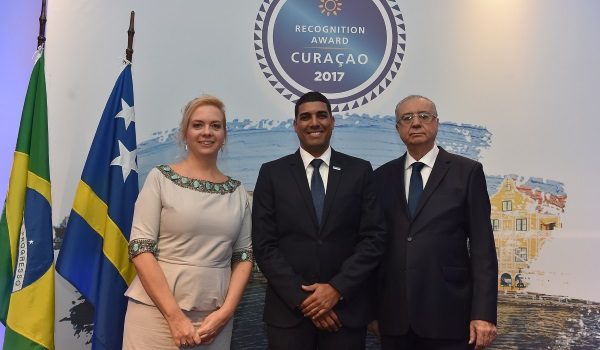 WILLEMSTAD- December 12, 2017 – In the last week of November, the Curaçao Tourist Board (CTB) recognized a number of strategic partners in the Brazilian market. This is the second consecutive year in which companies and institutions that contributed to Curaçao’s growth in the Brazilian market during the current year are recognized in this manner. The Minister of Economic Development, Dr. Steven Martina, was represented at the event by Mr. Sharlon Melfor and Mr. Irving Moeniralam. Also present were the director of the Curaçao Airport Holding, Mr. Wilhelmus Ignacio, and CTB Marketing Manager for South America, Mr. Muryad de Bruin.

The event was attended by strategic partners in the Brazilian market—representing wholesalers, airlines, public personalities, the media, and advertising companies—without whose support it would have been impossible to execute the 2017 Marketing and Promotional Plan.

This year, in the Wholesalers category, recognition was given to CVC, Flytour, Orinter and Schultz Turismo, while in the Airlines category to American Airlines, Avianca and Copa Airlines. The chosen Communicators of the Year were Amaury Junior, Marcelo Adnet and David Brasil. The CTB acknowledged all radio stations, newspapers and television channels that gave their support to the various publicity campaigns held, such as the newspapers A Crítica, Mercado & Eventos, O Estadão de São Paulo, Panrotas and Zero Hora, TV channel Globosat, production company Flix Media, as well as radio stations Alpha FM, CBN Amazonia, Itatiaia and Diario FM. In addition to these categories, the CTB also recognized partners of the press as well as social-media influencers: Record TV, Qual Viagem (magazine), Juju na Trip (blog), Fantrip (blog) and Melhores Destinos (blog).

With the help of all its strategic partners, the CTB will continue to promote Curaçao in the Brazilian market in 2018.