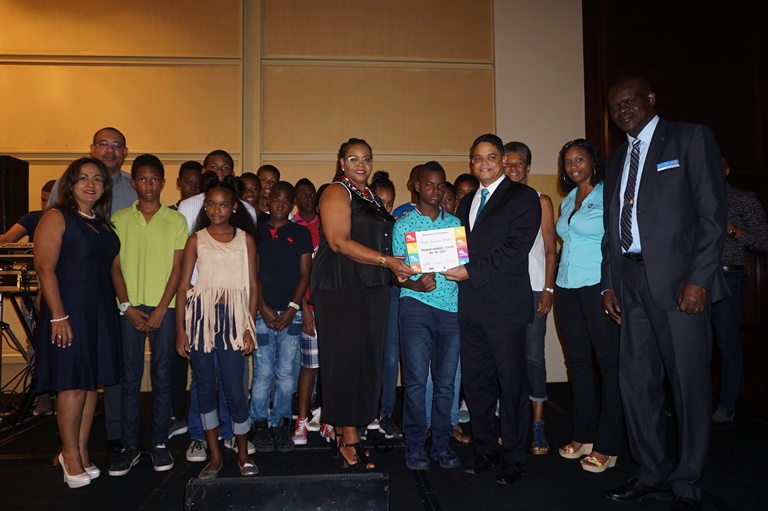 …CTB Awareness Campaign…
WILLEMSTAD- December 20, 2016 –The awareness campaign titled “Dushi Hende t’ Ami; Mi ta ON!”, aimed mainly at youths between the ages of 12 and 19 years, recently handed out certificates to a group of 536youngsters. The project was aimed at increasing awareness among young people on the importance of tourism development for Curaçao and of their involvement in this development. The campaign consisted of six individual projects, implemented from June to December of 2016. The Minister in charge of Economic Development, Mr. Eugene Rhuggenaath, attended the occasion to hand out the certificates.

The campaign consisted of the following six projects: 1) A photo competition in which youths had to illustrate their view of tourism development in their country. 2) A conference for scouting and AGPNA youths, focussing on topics related to tourism development. 3) Several workshops and information sessions on the basic values required in order to work in the tourism industry. These were delivered to elementary school children by VSBO and SBO students after having received coaching from people active in the tourism industry. 4) Participation in the 2016 Study and Career Fair, where the youngsters received information on tourism development and employment opportunities in this sector. 5) Interactive information sessions on tourism aimed at VSBO students and 6) Tours to get youths in after-school care acquainted with several tourist attractions on the island.

The project was financed by Reda Sosial, with funds of the Government of Curaçao. The Curaçao Tourist Board (CTB) too made a financial contribution to the project and, together with Fundashon Nos Kousa, was in charge of its execution. We hereby wish to thank all organizations, schools, after-school care organizations, representatives of the private sector and all who in one way or another contributed to the success of the “Dushi Hende t’ Ami; Mi ta ON!!” awareness campaign.

Kòrsou mester bira "The Stage of the Caribbean"