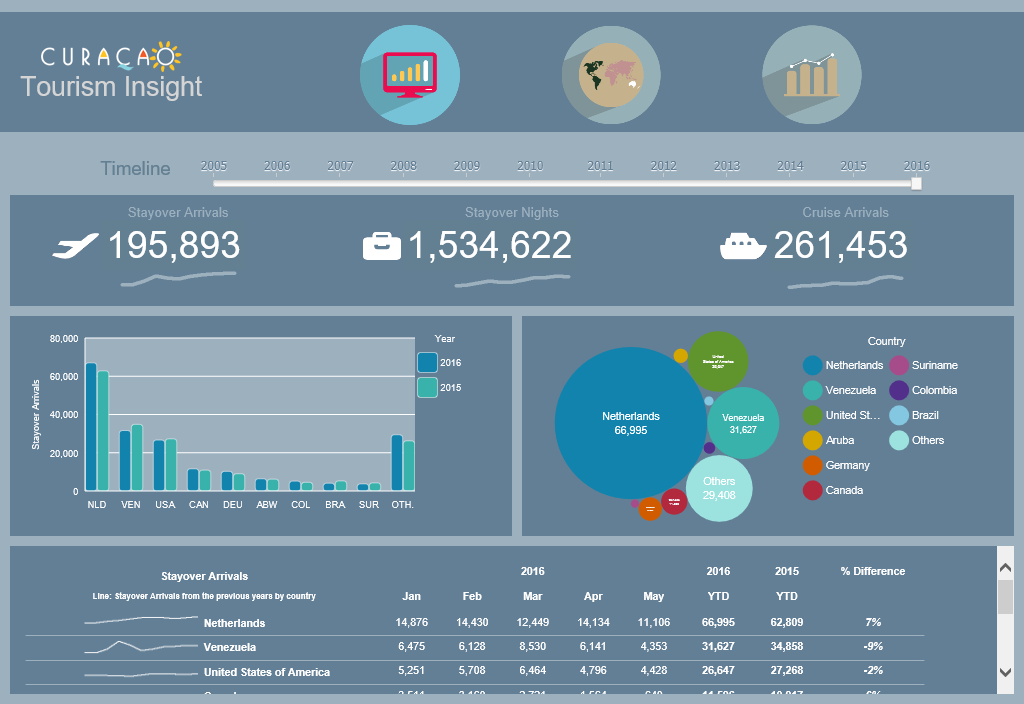 May 2016 recording 8% decrease - Curaçao Tourist Board

…Year to Date Economic Impact of $ 217.3 million dollars…
WILLEMSTAD – June 29th 2016 – At the start of the tourism low season, the Curaçao Tourist Board (CTB) is reporting a drop in visitor arrivals for the month of May 2016. We see year-on-year performance falling by 8%. Precisely, in total, 2.689 fewer visitors were registered this month, bringing the total count to 30.932 visitors against 33.621 in the same month last year. The decrease in visitor arrivals is visible across the board with all regions booking negative growth. May, as we know, is traditionally one of the low season months and is generally characterized by a slowdown in visitor arrivals.

The region ranked second in terms of visitor arrival numbers, South America, recorded a decrease of 16%. A total of 7.401 stay over arrivals compared to 8.760 in 2015. From Venezuela a total of 4.353 visitors are registered, reflecting a 21% decrease. Secondary markets in South America registered increases in the number of arrivals. Brazil and Colombia show respectively a 20% and 22% growth in stay over arrivals. Colombia is demonstrating more stability and less volatility when compared to other important South American markets like Venezuela and Brazil.

Stay over arrivals from North America declined by 16% in May with a total of 5.068 visitors compared to the 6.056 visitor arrivals in May 2015. The United States with 4.428 stay over arrivals recorded 13% less visitors. Canada recorded a 34% decrease with 640 stay over arrivals this May 2016. Both countries recorded a drop in arrivals, thereby confirming the onset of the low season for both. Presently, in accordance with the strategic recommendations of the Tourism Master Plan 2015-2020, a short term as well as longer term plan is being developed by the tourism sector. Certainly, a main objective is to accelerate tourism growth out of the North American region, in particular the US market.

Year to Date: Visitor Nights, Accommodation and Economic Impact
The first five months of the year 2016 is showing a cumulative 2% growth in stay over arrivals. This growth is mainly attributable to the performance of the European, North American and Caribbean regions in the period from January through to May of this year. The European market delivered the largest relative growth at 8%, North America remained stable at 0% and the Caribbean region did well at 3%.The South American region decreased recording 8% less visitors.

The information gathered from the Embarkation/ Disembarkation Cards shows that 56% (109.701 visitors) of the stay over visitors stayed at one of the registered accommodations in Curaçao. The share of arrivals among large hotels, small hotels and bungalows is respectively 27%, 12%, 18%. The number of visitors that stayed at other accommodation is 86.193. This is 44% of the overall arrivals.

The 7th edition of CNSJF promoted in Suriname