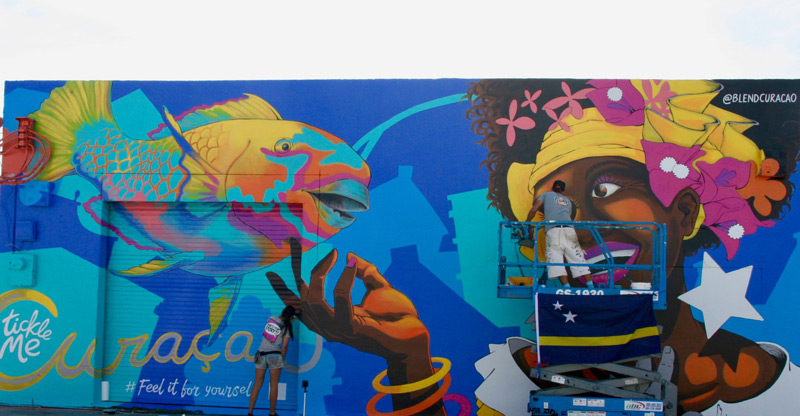 …Curaçao Tourist Board brings splash of color to Miami’s largest event…
WILLEMSTAD – November 14, 2019 – Inspired by its own burgeoning street art scene, the Curacao Tourist Board (CTB) is making a splash in Miami with a larger-than-life mural in the heart of Wynwood. With the eclectic street art that has emerged over the last two years in the nation’s capital of Willemstad, the CTB and its North American PR agency, Diamond PR, enlisted the help of established creative and local Curaçaoan, Sander van Beusekom, to design and paint an original piece that will be displayed in Wynwood in anticipation of Art Basel 2019. The annual event typically draws a crowd of more than 40,000 attendees and prominent celebrities, in addition to the everyday foot traffic in the flourishing area.

The 40’ x 18’ mural serves as a play on the island’s global branding campaign. The vibrant colors – a kaleidoscope of tangerine, sunny yellow, sky blue, indigo and fuchsia – draw directly from CTB’s style aesthetic, while the graphics represent the best that Curaçao has to offer, from its friendly locals to its splashy marine life. The piece, entitled “Tickle Me Curaçao,” highlights a fun-loving and stylish Curaçaoan woman tickling the underbelly of a parrotfish, a rainbow-colored creature that dwells in the island’s 65+ dive sites. A closer look, however, reveals a background reminiscent of Curaçao’s iconic historical buildings and the Queen Juliana Bridge, the tallest bridge in the Caribbean. The blue hues of the backdrop and the woman’s star-shaped earnings are a further nod to the ABC Island and the national flag.

“Everyday I feel inspired by Curaçao’s residents, by its colors, and by the island’s natural beauty and have always felt compelled to showcase those aspects in my art,” said van Beusekom. “Having the opportunity to create a Curaçao mural and put the destination on a global stage is something I could have only dreamed about.”

In an effort to further promote the island in South Florida, one of the island’s top feeder markets, on Nov. 12, the Curaçao Tourist Board also hosted an on-site event at the mural for local media. They welcomed a group of top South Florida journalists who represent travel and lifestyle publications in the region and nationally to meet van Beusekom and Mr. Paul Pennicook, CEO CTB and have the opportunity to put some finishing touches on the wall. Following the interactive painting session, media attendees enjoyed authentic Caribbean bites and engaged in one-on-one conversations with destination reps to learn more about Curaçao’s exciting news and developments.

“We are always seeking creative ways to push the envelope with our marketing strategies,” said Pennicook. “Thanks to the nonstop airlift on American Airlines out of Miami International, South Florida has always been one of our top geographic markets. Marrying the island’s emerging art scene with one of Miami’s most prominent events seemed like a natural fit.”

Van Beusekom, perhaps best known for his father and son fishing mural behind the Curaçao Maritime Museum, began the Wynwood project in early November. “Tickle Me Curaçao” will be on display throughout Art Basel (Dec. 5-8) and remain visible to Miami’s visitors through the end of January. Art lovers interested in learning more about the destination can scan the QR code at the bottom of the mural for more information.

Born and raised in Curaçao, Sander van Beusekom is one of several local artists credited with breathing new life into Curaçao’s Scharloo and Pietermaai districts with their oversized murals splashed against the city’s streets. Van Beusekom, along with his sister and project manager Nicole, run BLEND Creative Imaging, a forward-thinking art and graphic design company that dabbles in illustration and animation. Van Beusekom was one of the founders of Street Art Skalo, an organization whose mission is to beautify the Scharloo area of Curaçao and to showcase the island’s local talent. His piece behind the Curaçao Maritime Museum, a father and son out for a day of fishing, is one of the most Instagrammed pieces of street art on the island.