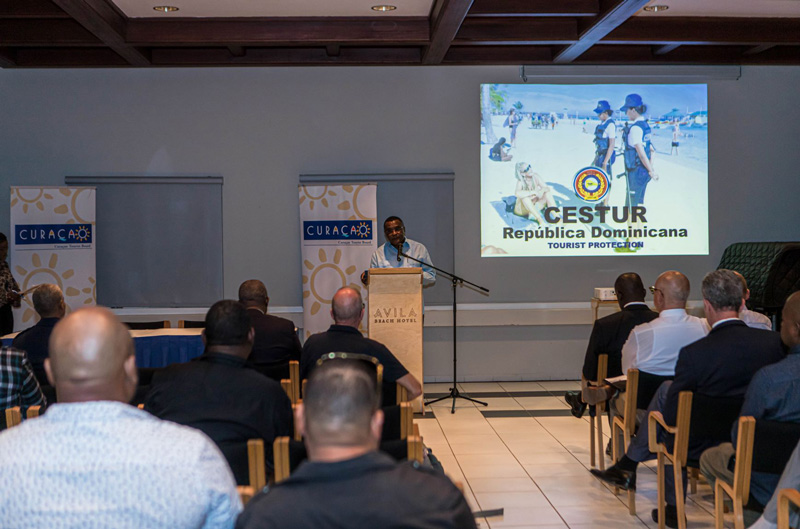 WILLEMSTAD – October 31, 2019– The Curaçao Tourist Board (CTB) and POLITUR Curaçao recently invited representatives of the Cuerpo Especializado de Seguridat Turística (CESTUR), the tourism security force of the Dominican Republic, to fly over and share their Prevention and Protection Plan with local authorities in Curaçao. CESTUR was officially established in 2013, but had been operating previously under the name POLITUR. Next year will mark the 20th year of its existence. CESTUR operates in different tourism areas and consists of approximately 1650 agents. During the presentation, representatives of CESTUR, shared how their Prevention and Protection Plan was conceived and implemented.

Speaking at the opening session, CTB CEO Mr. Paul Pennicook elaborated on the key role of security for the tourism sector, and stressed the importance of having a corps like POLITUR. Mr. Humphrey Josefa, President of the Board of POLITUR Curaçao, shared the organization’s mission and vision, its operation over the last six years and its future plans. During CESTUR’s presentation, Mr. Ygnacio Peña Grullon and Mr. Roberto Acevedo Tejada elaborated on the importance of working together towards a common goal, in this case, the safety and security of visitors.

The CTB and POLITUR Curaçao wish to thank all representatives of the public and private-sectors who attended the presentation. Thanks to all sponsors who made the presentation possible; KPC, CHATA, Quint’s Travelers Inn, Fuoco Restaurant and Bocas Restaurant.