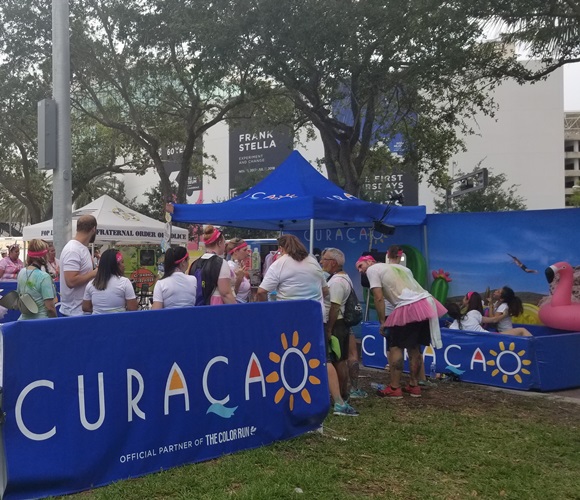 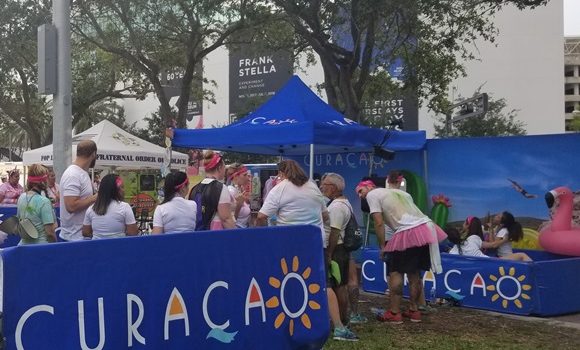 WILLEMSTAD –May 23, 2018 – Curaçao, as a destination, recently participated in the Fort Lauderdale Color Run. The Color Run is known as the happiest 5 kilometer race on the planet. Over 6 million people worldwide have at some point participated in one of the Color Runs organized in over 35 different countries. The Curaçao Tourist Board (CTB) chose to be one of the sponsors of the Fort Lauderdale 5K Color Run 2018, in an effort to show South-Florida consumers that Curaçao is the most colorful destination in the world. This year, the event broke its own attendance record.

The event served as an excellent platform for sharing, in a dynamic way, information on Curaçao, including the fantastic news about American Airlines’ additional flights to Curaçao and the latest performers to be added to the Curaçao North Sea Jazz Festival’s line-up. The Curaçao booth at the Finish Festival, The Color Run’s official after-party, was highlighted by an expansive backdrop with the electric blue waters of Playa Knip. Participants could also pick up their Curaçao sunglasses and take pictures in the blue Curaçao ballpit.

The Fort Lauderdale 5K Color Run included four color zones, with Curaçao sponsoring the color blue. The zone featured the Curaçao logo as well as delightful music by our local artists. Participants who posed for a picture at the Curaçao booth and shared it on social media with the #RightNowInCuracao hashtag could participate in a raffle to win a trip for two to Curaçao and a four-night stay at the Hilton Curaçao. The winners were announced live on stage during the Color Run.

Additionally, CTB organized an interactive event with media, inviting prominent journalists to join in at a social gathering during the morning hours which included the Color Run and a brunch at the Himmarshee Public House. A total of 11 South Florida media organizations were represented, including national outlets such as USA Today, SELF and BizBash. Representing regional outlets were THINK Magazine, Miami Food Pug, ChatChow TV and La Familia de Broward, among others. Looking back, the CTB is pleased with this dynamic initiative that led to a tremendous promotion for Curaçao.